In 1956, at the age of 17, Bruce Burnham chose to combine best of Angus and Brahman traits, sowing the seeds for a stud enterprise that would become Australia’s longest serving Brangus stud, Bimbadeen.  This decision was a departure from his family’s long beef breeding history – like most beef breeders of that era, they had traditionally run Herefords at their Eidsvold and Kingaroy family properties. 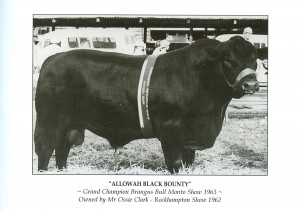 One of the key early sires of Bimbadeen Brangus – Allowah Black Bounty.

The next year Bruce would register his new stud with the Tropical Breeds Association, before the Australian Brangus Cattle Association was formed in November 1961.  As the youngest person among the core group of Brangus breeders in Rockhampton at that meeting, Bruce would take the last number handed out to the original Foundation studs by the ABCA.

Bruce and his team proudly provided quality Brangus cattle to producers throughout Australia for over 50 years.  They showed successfully throughout Queensland during this time, and sold to a top price of $16000 at the ABCA Rockhampton Sale.  The business has grown and strengthened over the decades, with invaluable input from Bruce’s wife, Barbara, who was heavily involved in the stud until their retirement. 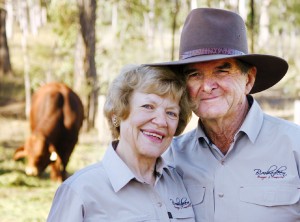 All of Bruce and Barb’s children have been involved in varying roles over the years, with daughter Amanda and her husband Mark (Salisbury) taking over the running of Bimbadeen’s stud and commercial and stud enterprises in 2011. 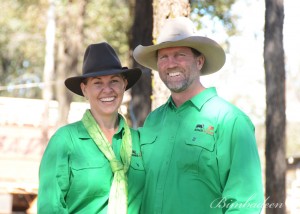 The stud has incorporated many new ideas, techniques and bloodlines over almost six decades – AI, ET, EBVs and Genestar technologies have all been employed to help us strive for that ultimate fertile, functional, adaptable beef animal. We have provided seedstock to dozens of Brangus studs in the industry today and we are proud of the impact Bimbadeen has had on Australian Brangus.

Bimbadeen is the only (continuously operating) Australian Brangus foundation stud.   There are many good reasons we are still here – not the least of which are that we understand the value of balance.  We have learned from our long history, while also keeping up with latest industry tools and breeding techniques.  We seek to maintain low birth weight while concentrating on early-finishing animals who can walk out in any country. We continue to respect ABCA stud guidelines, while also ensuring our commercial goals are being met.

Stud No. 9 – maintaining the balance and still going strong.